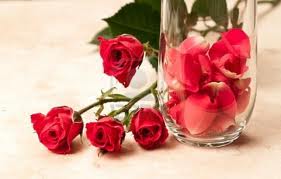 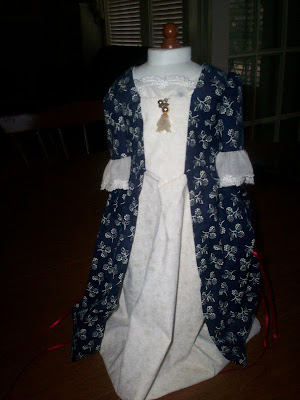 This is a Felicity dress I started a LONG time ago and have never been able to finish. I am posting a picture of it here to see if it will shame me into working on it. I can't seem to think of a trim or color that would give it enough pizazz that someone would want it.

I'm at a standstill. At this point I would rather just finish it any old how. If you have any ideas for spicing it up let me know. If I could just get it hemmed and put the velcro in I'd be ecstatic. Then I could add something pretty or fluffy and be done!

I want to work on another dress, but won't let myself until I finish this one.
Posted by goodwillgirl at 11:07 AM 2 comments:

What's On Your Nightstand?

I saw this at vintage simple.

And here's my nightstand. I can show it only because I cleaned my room yesterday. 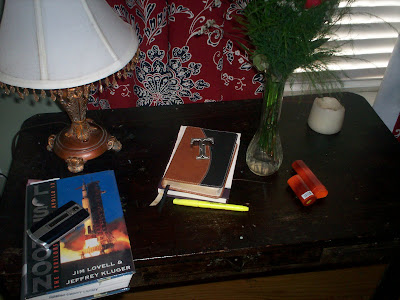 The book is "Lost Moon" by Jim Lovell. I'm reading it aloud to the boys.

The roses are from my boyfriend, just because he's like that.

There's my phone and an odd candle that I should probably throw away. And a lamp that I study by (or look at magazines by). An eyeglasses case from Goodwill - ha! Bible. The letter "T" paper weight. A highliter that I use to study. And that's my table. I don't know what it says about me except that "this little table is fairly neat right now, it must be a miracle!"
Posted by goodwillgirl at 7:38 AM 1 comment:

I decided to do some fun mindless things on this project, like cutting off the buttons, 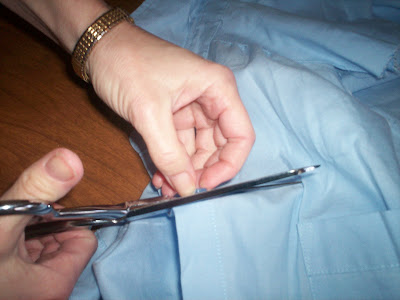 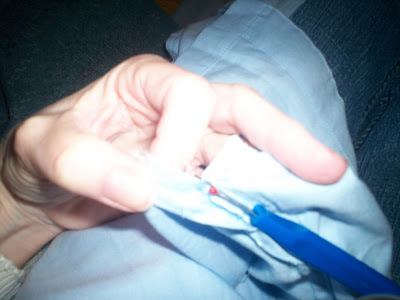 Then I shaped up the armholes, using the pattern pieces from that vintage patern. As you can see, the original armholes are so huge that I couldn't really cut the curve of the new ones. I fudged on the angle so I could get at least part of the curve. I thought maybe I could fiddle with the seam allowances and make it work. 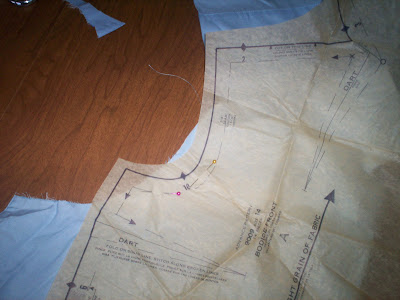 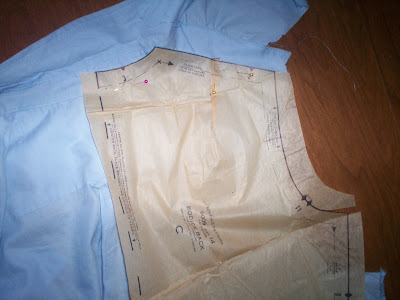 I pinned in one of the sleeves and tried it on. As you can see, the fudging I did took up all the fullness of the bodice. I didn't foresee that the different sleeve shapes would be such a problem. I could have added gussets or pieced the fabric to get the right amount for the new sleeve, but that started feeling like drudgery. I have officially scrapped this project. The light blue will make perfect doll aprons for Kirsten someday!

Lesson learned: You can't really adapt a man's sleeve to a woman's because, even though there is more fabric in the shirt, it has been cut AWAY more in the armhole. 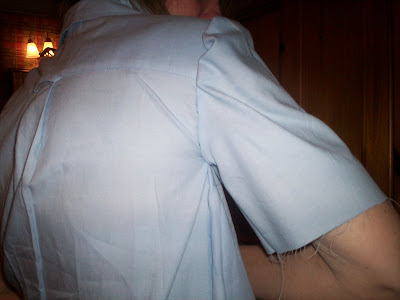 Let's all cry together. Wah!
Posted by goodwillgirl at 4:53 PM 1 comment:

I considered this shirt as fabric for a pleated ruffle. But it has no black in it. I, non-designer that I am, think that would be a problem in a dress with black buttons. I didn't buy it.

I didn't buy anything. The furniture room was practically empty except for this chair that had already been purchased and that this other lady really wanted and argued about for several minutes while I was there.

Give up, lady. Somebody else already bought it!

There were a couple of TV's and an ugly TV table. Bleah.

The other Goodwill in town is just as bleak. I think all the nouveau poor are buying things at Goodwill. I think the old poor should have priority. 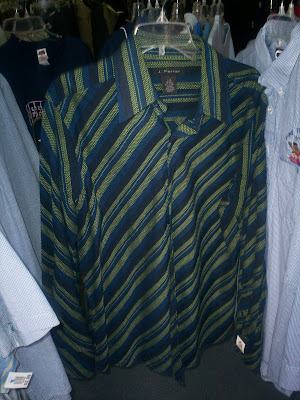 It's hideous, isn't it? But it would make a good ruffle. heh

And here is a picture I uploaded by mistake, but it's kind of cute. From the night I took my boys bowling. One of the boys is not in the picture because he was... well, bowling. 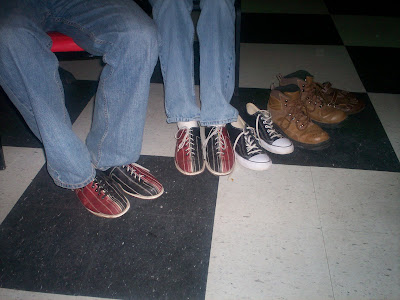 I took an allergy pill and slept for a day and a half. I have not sewed or washed clothes or done any dishes. Just slept and studied.
Posted by goodwillgirl at 1:54 PM 1 comment:

Here is the pattern I got the sleeve from. I had to search through all my patterns to find one. I've gotten rid of a lot of patterns so this is THE only short sleeve I have. It's a fun, vintage pattern I probably bought at a garage sale. 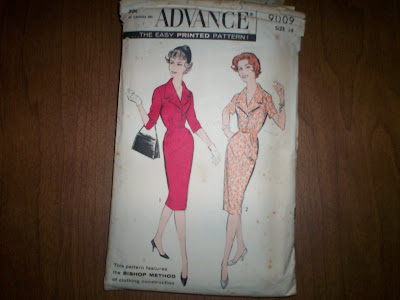 I spent good money on buttons. But not much! I like the shank buttons. They're shiny and very black, like little eyes! They'll show up much better than matte buttons with holes. The seam binding is for the bottoms of the sleeves. I'm toying with the idea of a ruffle around the bottom, too. 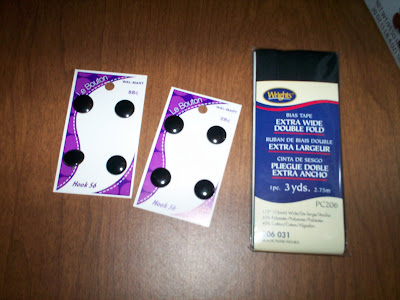 And this is the lovely salad I had today. I tried to copy the one I ate at Chili's the other night and I think I did pretty well. I couldn't eat it fast enough! 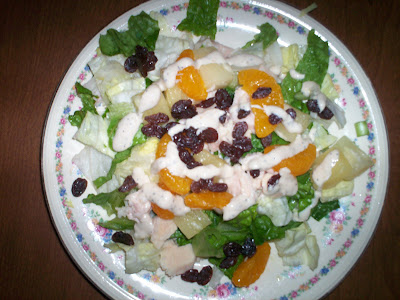 I spent a good part of the day dealing with the Navy. They're not real welcoming to homeschooled kids. They're putting us through hoops. And I had to study today. So no sewing.
Posted by goodwillgirl at 6:34 PM 1 comment:

I ripped out the shoulder seams... 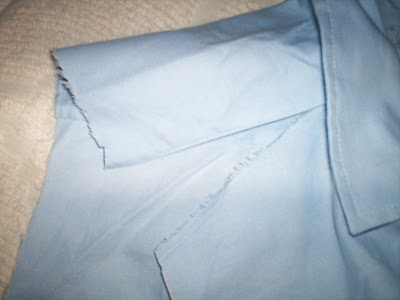 ...and gathered the front sections. 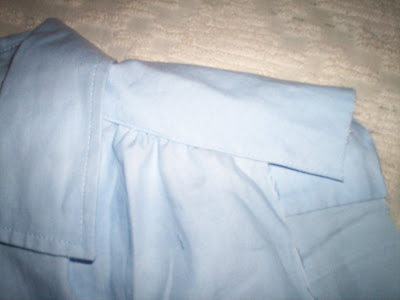 And now I'm cutting new sleeves out of the old ones. 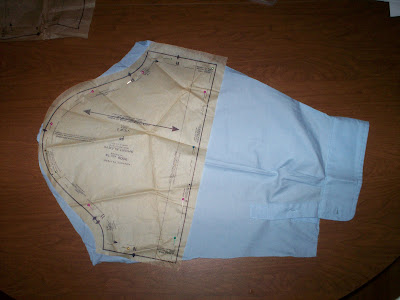 Posted by goodwillgirl at 6:28 PM 2 comments:

Blessing of the Day

My husband saying, I don't want to watch TV, I just want to sit here and hang out with you.